P-value could be written as

This is the formula for one-tailed test, and generalizable to the other-tail or two-tail tests. Here, we will focus on one-tail test. $H_0$ means that null hypothesis is being true. In this post, I will use hypothesis as a shorthand for null hypothesis unless noted otherwise.

Note: Usually, an experiment requires p-value to be smaller than a cutoff known as $\alpha$ significance level. Controlling $\alpha$ to be low (e.g. 0.05) is equivalent to keeping specificity high (0.95) as $\alpha + \textsf{specificity} = 1$. If you haven’t thought about $\alpha$ and specificity together before, a related discussion on this topic can be found on stats.exchange.

P-value provides little information about the sensitivity or false discovery rate (FDR) of a test. A somewhat surprising fact is that with a p-value of 0.05, a sensitvity of 0.8, and a prior probability of 0.99 for a null hypothesis being true, FDR could be as high as 0.86. In other words, 0.05 is too generous a cutoff for p-value in general.

I have heard of null-hypothesis testing for a long time, but not until recently, I set out to implement several common hypothesis testing methods (t-test, Mann–Whitney U test, Wilcoxon signed-rank test, Fisher’s exact test) myself, trying to internalize my understanding.

The calculation of a p-value follow a consistent pattern.

This process would sound familiar if you have conducted t-test before. When I learned t-test for the first time, I was taught to look up a critical value in the t-table instead of computing the p-value directly, which could be difficult without a computer. The critical value is the value of a test static that corresponds to a desired upper bound of p-value (e.g. 0.05, aka significance level, $\alpha$). So even without knowning the exact p-value, by comparing my calculated t value to the critical value, we could know my p-value is above or below $\alpha$.

You may wonder how do we know about the probability distribution of a test statistic. It should have been proved when the testing methods were initially developed. For example, $Z$ follows a normal distribution, $T$ follows a t-distribution. Both $U$ (Mann–Whitney U test) and $W$ (Wilcoxon signed-rank test) follow a normal distribution when the sample size is large, so they essentially become z-test once the statistic is obtained. For Fisher’s exact test, since the probability distribution is discrete, so all probabilities corresponding to the current or more extreme tuplets are calculated and then summed up.

Distribution of p-values under null hypothesis

We will interpret the p-value from two perspectives, frequentist and Bayesian. Let’s start with the frequentist view.

What does a p-value exactly mean? The definition in the TL;DR section may sound still too abstract, I find it very useful to interpret p-value in the context of a confusion table;thus, it is the frequentist view.

The table is adapted from wiki with a more consistent naming and styling convention applied. For example,

Insight: If you try to match the definition of p-value that is “the probability of observing the current or more extreme data conditioned on that the null hypothesis being true”, you would focus on the CN column since all hypotheses are true in this column so that it meets the condition. If p-value is less than a cutoff (e.g. significance level, α=0.05), then hypothesis is rejected, which results in a false positive. Therefore a p-value is related to the FPR. To be more concrete, since p-value follows a uniform distribution under true null hypotheses (see derivation above), when you conduct multiple tests, an $\alpha$ portion of those tests would turn out be false positive. Therefore, keeping the $\alpha$ low is equivalent to keeping the specificity high, and an $\alpha$ of 0.05 corresponds to a specificity of 0.95. In other words, FPR = 1 - specificity = $\alpha$.

Now, we have estabilished the relationship between p-value/$\alpha$ and specificity, does p-value tell us more, for example, sensitivity or false discovery rate (FDR)? Since precision and FDR sum to one, knowing one will get us the other, so we’ll focus only on FDR.

First, since sensitivity and specificity depend on completely different variables (TP and FP vs TN and FN), and these are usually unobserved variables, even if with margins fixed, sensitivity is intractable given specificity. Then, what about FDR? Although FDR and specificity share FP, it is also intractable without further information. As noted in An investigation of the false discovery rate and the misinterpretation of p-values (2014) by David Colquhoun, knowing p-value gets you “nothing whatsoever about the FDR”. This is a bit disappointing, but it is also crucial to keep in mind so as not to over-interpret a p-value.

$N$ is the population size, which would be cancelled anyway, so we do not need to know its exact value. This relationship is easily verifiable according to the confusion table. Let’s take a concrete example first and then draw a 3D surface to visualize the relationship. Suppose $r=0.01$ (in other words, the disease is rare), specificity is 0.95 (corresponding to the common cutoff of 0.05 for p-value), and sensitivity (power) is 0.80. This is a reasonable setup, not extreme at all, but if you replace the variables with these numbers in the equation, you get a FDR of 0.86, which effectively renders the test method under consideration useless. Remarkably, even when the sensitivity is 1, the FDR is still as high as 0.83. It turns out that increasing sensitivity has a limited effect on the FDR when the $r$ is low and specificity is not high enough (< 0.999), which is seen from the following plots for $r=0.01$ and different specificities.

The surface of FDR ~ sensitivity & specificity is shown below for different $r$ values. 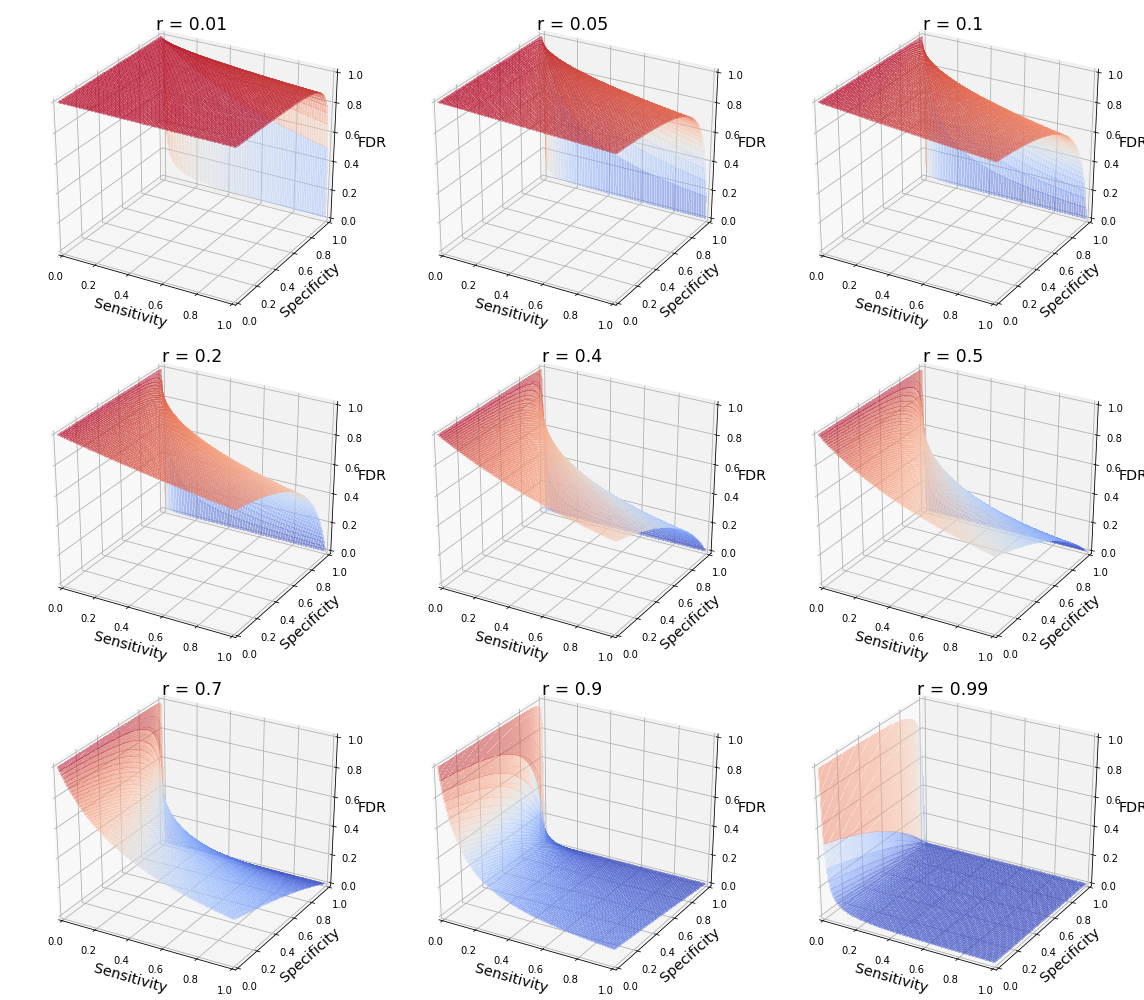 Note when $r = 0.01$ or low in general, FDR is mostly near 1 until specificity becomes extremely high, which explains Colquhoun’s advice that “if you wish to keep your false discovery rate below 5%, you need to … insist on p≤0.001” (i.e. specificity > 0.999). The surface changes as $r$ increases.

The notebook for generating this figure is available at here. In it, I also plotted FDR ~ rate & sensitivity for different specificities. 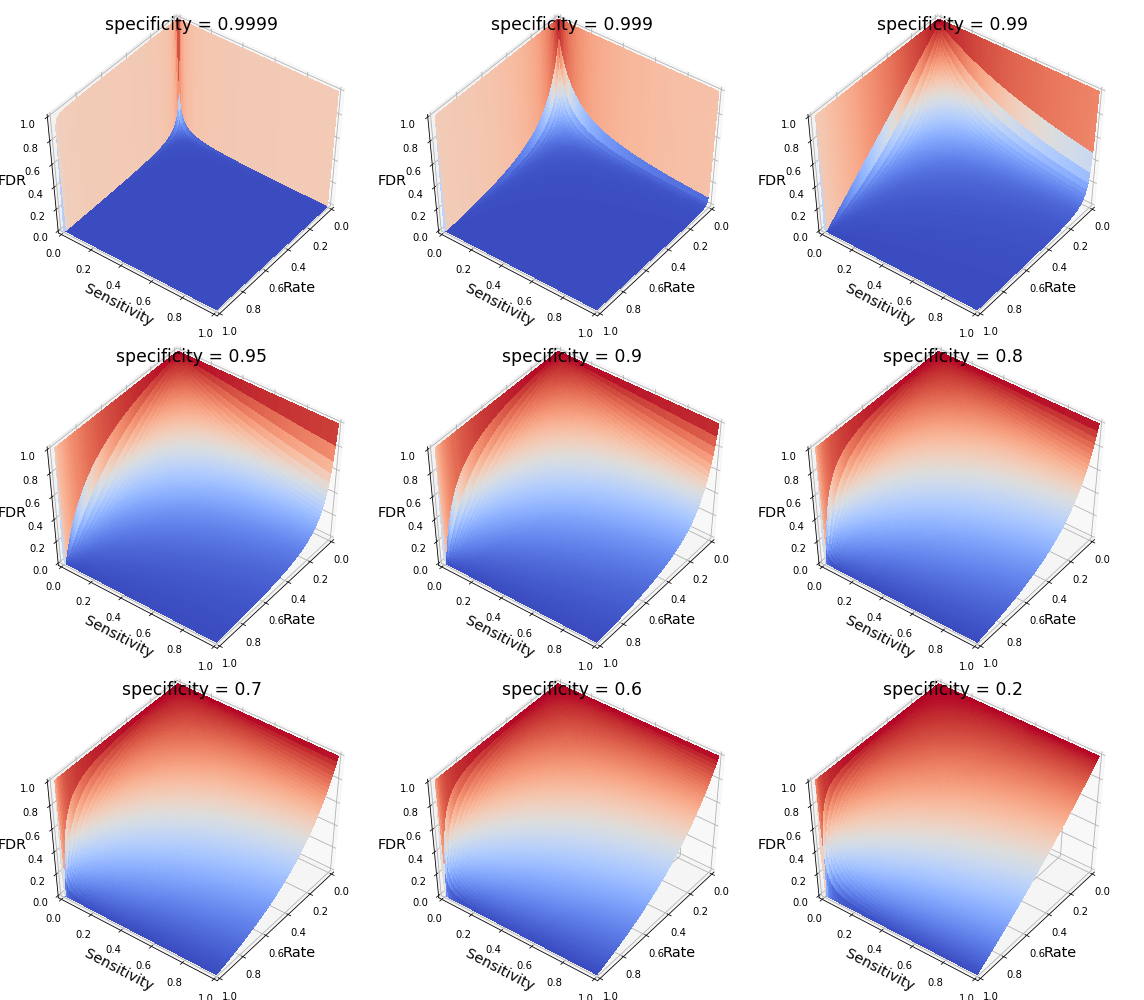 As p-value is a conditional probability, we could write it in terms of Bayes rule, and there comes to be some more insight.

If you’ve read the long version, I hope you now have a better sense of the limited information conveyed by a p-value. In summary, a p-value is related to specificity, controlling the p-value to be low is equivalent to keeping the specificity high as $\alpha + \textsf{specificity} = 1$, but it provides little information to the sensitivity or FDR of the test. Importantly, if the prior probability of the hypothesis being false is low which could be common (0.01), then even a very sensitive (e.g. 0.8) and specific (e.g. 0.95) test could still have an unacceptably high FDR (e.g. 0.86). I thought this is the main message conveyed in the seemingly absurdly titled paper Ioannidis JPA (2005) Why Most Published Research Findings Are False. PLoS Med 2(8): e124.. But if you understand how such a high FDR is calculated and the surface plots shown in this post, you may not feel it so absurd anymore.

To me, the widespread of a generally too generous cutoff of 0.05 appears to be an unfortunate accident due to misunderstanding of a p-value. Such generosity explains why some journal went as far as to ban p-values, but in my opinion, it is not that p-value is bad, but more of that a p-value of 0.05 is often too generous a cutoff. Perhaps More importantly, if you insist on having p<0.05, then be conservative with the conclusion, because extraordinary conclusions require extraordinary evidence and the evidence of a p<0.05 is usually not so extraordinary.

This post reflects my current understanding of p-value and null hypothesis testing, if you see any mistake in the post, please let me know by commenting below.